Hamamatsu Photonics develops and manufactures image sensors with high sensitivity and a wide dynamic range that are ideal for high precision measurement such as spectrophotometry, as well as industrial measurement. To help you select the best devices, we offer a wide product lineup that covers a broad spectral range from the near infrared (NIR) at long wavelengths up to 2.6 um through the visible, ultraviolet, vacuum ultraviolet (VUV) on down to the X-ray wavelength region.

Example of high functionality based on CMOS technology

This image sensor can detect distance information for the target object using the TOF (time-of-flight) method. A distance measurement system can be configured by combining a pulse-modulated light source and a signal processing section.

Our unique photosensitive area technology provides high sensitivity in the near infrared region.

Hybrid technology (Three-dimensional mounting)
Back-thinned technology
In general, CCDs are designed to receive light from the front side where circuit patterns are formed. This type of CCD is called the front-illuminated CCD. The light input surface of front-illuminated CCDs is formed on the front surface of the silicon substrate where a BPSG film, poly-silicon electrodes, and gate oxide film are deposited. Light entering the front surface is largely reflected away and absorbed by those components. The quantum efficiency is therefore limited to approx. 40% at the highest in the visible region, and there is no sensitivity in the ultraviolet region.
Back-thinned CCDs were developed to solve such problems. Back-thinned CCDs also have a BPSG fi lm, poly-silicon electrodes, and gate oxide fi lm on the surface of the silicon substrate, but they receive light from the backside of the silicon substrate. Because of this structure, back-thinned CCDs deliver high quantum efficiency over a wide spectral range. Besides having high sensitivity and low noise which are the intrinsic features of CCDs, back-thinned CCDs are also sensitive to electron beams, soft X-rays, ultraviolet, visible, and near infrared region. 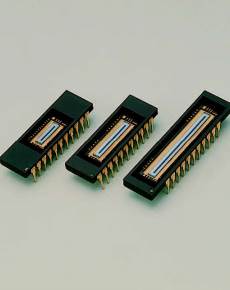 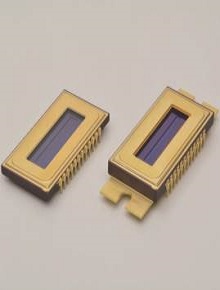 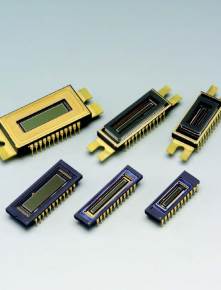 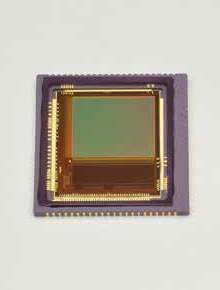 These are APS (active pixel sensor) type CMOS area image sensors with high sensitivity in the near infrared region. They include a timing generator, a bias generator, an amplifi er and an A/D converter, and offer all-digital I/O for easy handling. 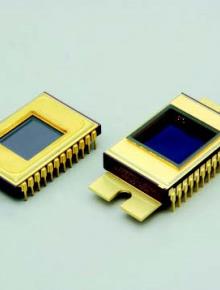 Back-thinned type CCD area image sensors deliver high quantum efficiency (90% or more at the peak wavelength) in spectral range up to VUV region, and have great stability for UV region. Moreover these also feature low noise and are therefore ideal for low-light-level detection. 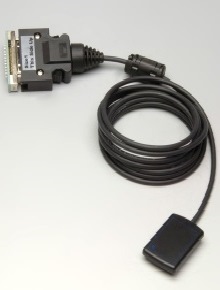 With the CCD with a CsI type FOS (FOP with X-ray scintillator), the FOP functions as a shield, so X-ray damage on the CCD can be suppressed. In addition to FOS, FOP coupling is also possible. Note that products that employ GOS for the scintillator are also available as low cost types.
The TDI -CCD S7199-01 and S8658-01 can provide crosssectional
X-ray imaging of large objects through TDI operation. It can be used not only in X-ray radiography equipment but also for industrial inline non-destructive inspections.
The photodiode arrays with amplifiers that have a phosphor sheet affixed on the photosensitive area can be used in various types of inspection equipment such as inline industrial product inspection equipment and foreign matter inspection of canned and retort food. 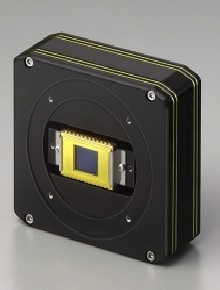 Image Sensors for Near Infrared Region 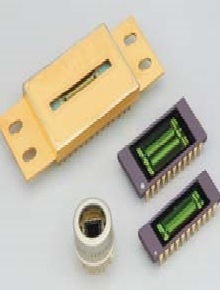 InGaAs image sensors are designed for a wide range of applications in the near infrared region. Built-in CMOS ROIC readout circuit allows easy signal processing. These image sensors use a charge amplifier mode that provides a large output signal by integrating the charge, making them ideal for low -light-level detection. 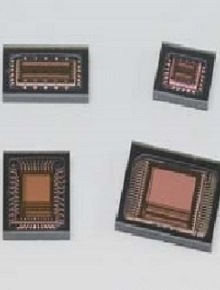 These distance image sensors are designed to measure the distance to an object by TOF method. When used in combination with a pulse modulated light source, these sensors output phase difference information on the timing that the light is emitted and received. The sensor output signals are arithmetically processed by an external signal processing circuit or a PC to obtain distance data. 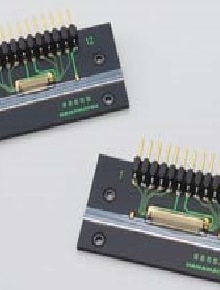 Photodiode arrays with amplifier are a type of CMOS linear image sensor designed mainly for long area detection systems using an equal -magnification optical system. This sensor has two chips consisting of a photodiode array chip for light detection and a CMOS chip for signal processing and readout. A long, narrow image sensor can be configured by arranging multiple arrays in a row. 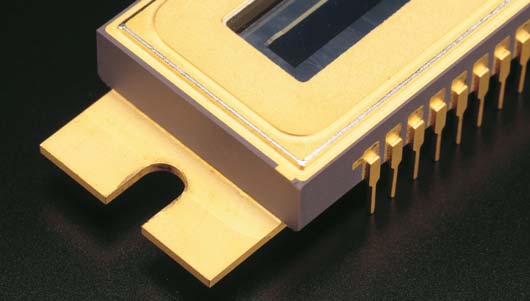 Back-thinned TDI (time delay integration)-CCDs allow acquiring high S/N images even under low-light conditions during high-speed imaging and the like. TDI operation yields dramatically enhanced sensitivity by integrating the exposure of a moving object. The back-thinned structure ensures high quantum efficiency over a wide spectral range from the ultraviolet to the near infrared region (200 to 1100 nm).

CCD area image sensors are semiconductor devices invented by Boyle and Smith at the AT&T Laboratory in 1970.
The CCD (Charge-Coupled Device) comes from operation/ function that charge stored in one area of the CCD is transferred (or coupled) to an adjacent area. Areas where the charge is stored are referred to as potential wells, and are created when an external voltage is applied to the gate electrodes. The struc- ture of a CCD is based upon a MOS (Metal Oxide Semiconduc- tor) capacitor (Figure 1-1). The gate electrodes (P1, P2 and P3) are usually made from a highly conductive material such as metal or polysilicon. The oxide layer is SiO2 (silicon dioxide) and the channel is a semiconductor.

Back-thinned TDI (time delay integration)-CCDs allow acquiring high S/N images even under low-light conditions during high-speed imaging and the like. TDI operation yields dramatically enhanced sensitivity by integrating the exposure of a moving object. The back-thinned structure ensures high quantum efficiency over a wide spectral range from the ultraviolet to the near infrared region (200 to 1100 nm).